181209 – Sensex, in absolute terms has moved up 600 points since the last MarketFastFood post, the high was even more. We during this period bought a stock called UPL and also exited with quick returns before it fell again. The idea was not to indulge into trading, as said in the previous MFF post, the market had been volatile and after the recent rally we just thought to exit before it comes down, and it did come down. We recently recommended the stock MGL in the portfolios. Will exit the same when the situation warrants.

While investing keep in mind, there is nothing called Short Term, Medium Term or Long Term, there is only Profit Term..!

We also feel that the chances of FED increasing the rates this month have come down to 50:50, earlier the chances were much higher. Also, the election results won’t impact much, the impact may be seen for maximum Three days. Read the previous article by scrolling down. Also, see the pictures below sent to us from IDFC Mutual Fund. These pictures give us so much sense. 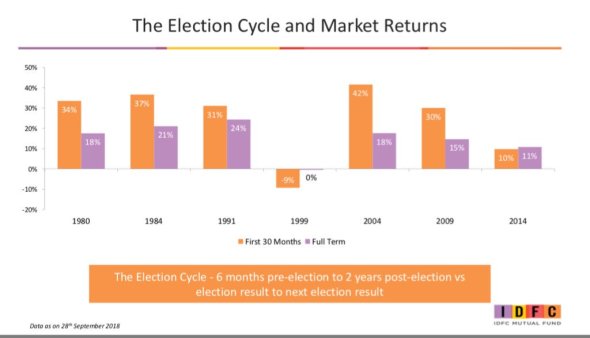 Exit polls surveys have been declared predicting not a good picture for BJP while giving an advantage to Congress. Rajasthan would go to Congress, tough fight in MP and Chhattisgarh, TRS will take Telangana. Manipur doesn’t matter!

Let’s first discuss why I don’t give any importance to these exit polls and then let’s divide the results into scenarios.

Why these exit polls don’t matter?

First, Exit polls in the last few occasions have failed. Gujarat is an example.

Second, Rajasthan has always voted government’s alternately between both the major parties. Hence, technically it’s congresses turn now. The market won’t see Congress coming back to power as a negative.

Third, After 15 years of anti-incumbency, a defeat cannot be termed as bad. It’s actually embarrassment even that after decades of one-party rule, the exit polls don’t give a clear victory to the opposition there.

Fourth, Market will be more bothered about the 2019 Lok Sabha polls, these state results have no implications on them. Voters have become smart. They have selectively started voting differently for state and central elections even while held at the same time.

The market will see this negatively only in one aspect: The number game in Rajya Sabha changes!

The positive impact, as per general expectations hence the market will take this as no surprise.

Anything more than Rajasthan to Congress is a negative news, but just for three days.

All three states BJP: Super news for the market! Would be a dreadful defeat for the opposition. Already Telangana seems to slip out of the Con-TDP combine.

Hence when the finals are just around the corner, don’t bother much about the so-called semi-finals. Choosing a CM face and a PM face are two different things now.

Yes, whatever the results are there would be short and quick volatility, those fully invested can just ignore it and ride through it, and those with cash in hand can look at entry points if they arise.

The overall valuations in certain pockets are cheap now, keep in mind that market will turn around. It sometimes takes little longer time and with so many events happening the flat trend of over markets can continue till Lok Sabha polls. If all three states are won by the sitting government then the flat may start trending up slowly.

So let’s have some fun over the next two days. EVM’s are damn scared that they should not be finally blamed on 11th J

This site uses Akismet to reduce spam. Learn how your comment data is processed.

How many Millionaires do you know who have become Wealthy by investing in Fixed Deposits? I rest my case - Robert G. Allen

Articles r posted under various Heads. Choose them below:

with Super Star Rajni at his Home